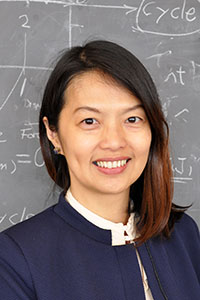 I graduated from the University of Malaya with Bachelor of Dental Surgery and obtained her Fellowship in Dental Surgery, Royal College of Surgeon (FDSRCS) England in 1998 and PhD from Manchester, England in 2013.

Prior to joining to the University of Minnesota, I was Associate Professor at the Department of Restorative Dentistry, University of Malaya. I was the Head of the Department of Conservative Dentistry here from 2011-2013. In 2013, along with the restructuring of the departments, the undergraduate curriculum underwent a major revision, changing from a discipline-based curriculum to an integrated one. Under the new integrated curriculum, the Coordinator of the Integrated Operative Dentistry and Cariology Module, coordinating its curriculum, teaching and assessment. I was involved in the review of this new integrated curriculum, which involved innovations in non-clinical and clinical assessments. In 2014, I was appointed by the Malaysian Dental Dean Council to lead the Malaysian National ICDAS taskforce to oversee the national implementation of ICDAS in all the dental schools in Malaysia.

My main research interest is in the development and validation of in vivo diagnostic methodology for dental caries, early erosion and advanced erosive wear. I was also involved in the assessment of the efficacy of various dental and biomaterials in the treatment of caries and erosion. I was the Principal Investigator of a High Impact Research Fund awarded by the Malaysian Ministry of Higher Education and led a team of researchers on various research projects on the detection of dental caries and dental erosion.